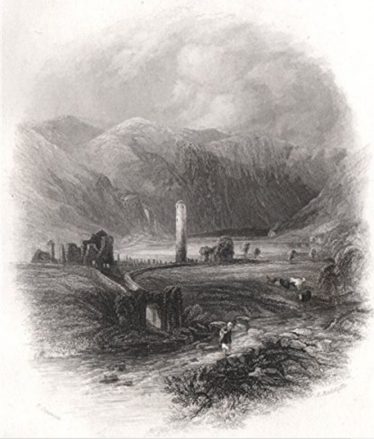 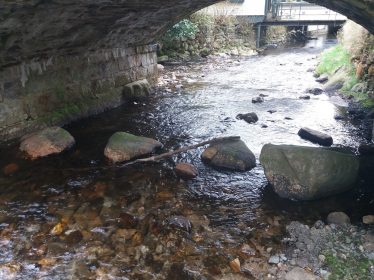 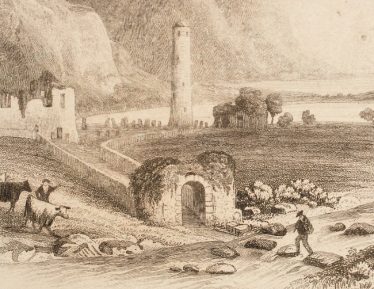 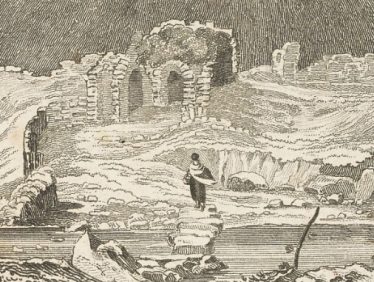 In the early drought conditions of 2018, while on a morning ramble, a set of very noticeable stones were visible beneath the Glendasan Bridge at the gate to the Glendalough monastic complex. The water had fallen very low and these stones stood proud just under the western lip of the 1870s bridge.

It would appear that great care was taken by the bridge builders to ensure these ancient stepping stones were left in-situ, placing their breakwater between two of the surviving five massive stones.

The first record of a crossing at this point is an annalistic reference to a bridge being destroyed by a great flood in 1177. There is no further account of a bridge until the 1870’s, though it is possible a bridge may have served the complex until it fell into a state of abandonment following its burning by the English in the closing years of the fourteenth century. The stepping stones served as access to the monastic gateway until the Board of Works built the current bridge in the early 1870s,

From the earliest images and traveller accounts, the monastic city was clearly accessed via stepping stones and these stones are immortalised in numerous artworks of the 18th and 19th centuries by many of Europe’s foremost antiquaries and artists as they visited and drew at Glendalough, including Beranger, Bigari and Petrie.  Paintings and sketches  by these early visitors to the valley show the number of stepping stones ranging from three to six, depending on interpretation. For example, one George Petrie image featuring the stones has been engraved by two different artists and the number of visible stones differs, though it is essentially the same image.

Based on an assessment of the best available visual evidence, it appears that the crossing consisted of two large landing stones – large flat stones embedded in the bank as the embarkation point onto the causeway – and five flat-topped stepping stones within the water channel.

Currently five stones remain, and it would seem that the landing stones were removed when the banks were widened to accommodate the bridge-building. The evidence of this widening is still visible in the cut of the riverbank today.

The stones are also to be found in a number of photographic images from the late 19th and early 20th centuries. A quick comparison of these images against the etchings, paintings and our present day images shows that the stones have not moved much over the last three centuries, and their protected position under the bridge will hopefully ensure they are safe for many more.

The Stepping Stones can be viewed beneath the bridge over the Glendasan River just west of the 18th C. Royal Hotel in front of the Glendalough Gateway. Care is advised while viewing.

Comments about this page