The Glendalough Heritage Forum are delighted to participate in the National Museum’s ICAN Postcard project  for Heritage Week 2021.

The bi-lingual title encapsulates our objective of drawing on a shared history and heritage to connect people with their place, as well as connecting ICAN groups within each community to each other and with their diaspora. The idea is to strengthen the connections between the community groups within the iCAN network.

Over May & June, 46 participants from 19 community groups based in counties Clare, Galway, Mayo and Wicklow, attended a series of photography and creative writing workshops with  Aoife Herriot and Alice Kinsella.

Workshop participants were encouraged to experiment with different ways of capturing and documenting aspects of their local heritage, and to use newly learned writing techniques to compose poems and prose inspired by their surroundings.

At the end of the process, each group selected an image or images and some writing as the key elements of their postcard. Each group worked with Damien Goodfellow, our graphic designer, to improve and finalise their designs.

Each card in the collection is unique, and details the group’s website, email and social media to encourage engagement with their community archive websites. The postcards will be made available in each participating community during Heritage Week to be used to connect with friends and family at home and abroad.  We hope that the postcards will raise awareness of our heritage assets and the role of community volunteers in preserving, protecting, and promoting our local history and heritage. 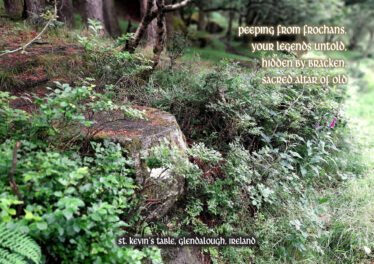 For our contribution to this process, we were intent on drawing attention to a now lost feature of Glendalough’s heritage.

Visitors to Glendalough are directed to the many Monastic ruins, the Deerstone, the Green Road and the lake views – but not many get to see the surviving stretch of medieval pilgrim path, the ‘Seven Fonts’ field of bullaun stones, the Giant’s Cut or St. Kevin’s Table.

We selected St. Kevin’s Table (also known as St. Kevin’s Griddle) to feature on our postcard.

After taking two dozen images in differing light and at various angles, the image we settled on was chosen because it shows the feature emerging from a mass of undergrowth as it is once again brought into the public realm. The photograph was taken by forum member Pat Reid and he penned a simple poem to reflect the re-discovery of this feature, having once been a popular tourist attraction, featured in tales of the area. It is last mentioned in the Duchas Schools Collection here.

We will make copies of our postcard available in numerous venues around Glendalough from Heritage Week 2021 and they will be available while stocks last. We will also post a copy of our postcard to anyone that contributes a photo, tale or article about Glendalough to this website using the contribute button at the top centre of this page.

A printable version of the postcard is available at the bottom of this page. We would be delighted if you would print a copy (on card or stiff paper), write what Glendalough means to you on the card and send it to us at:

We hope to feature the returned cards in a project for next years Heritage Week events. 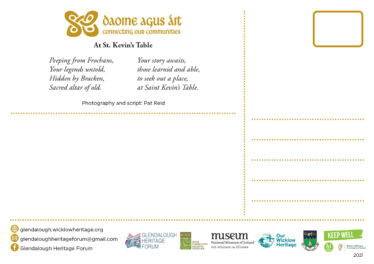 A short video about how we developed our postcard project can be viewed here.

Another element of the postcard theme for Heritage Week, we created a short video featuring old postcards of Glendalough. We have added a narration of some of the messages featured on these cards.  The video can be viewed here.

Narrated by Cillian O’Gairbhi, with music by Pat Reid.

Our sister heritage group The Glens of Lead, also produced a wonderful card for this project: 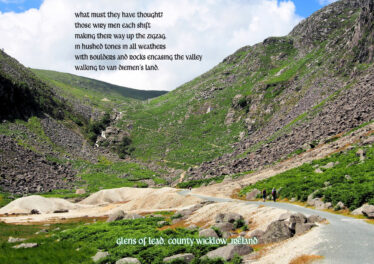 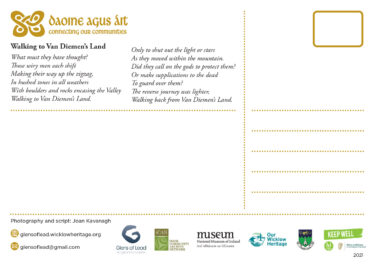 A small working group consisting of three community members and the iCAN Development Officer fed their ideas to graphic designer Damien Goodfellow. Damien then created a variety of logo designs. Some of the designs were developed further and a shortlist of two was selected to present to the network. Members voted via an online poll and the gold Celtic knot work design received the most votes, making it the official project logo.

You can view the nineteen postcards in the collection here.

A short film about the Daoine agus Áit project can be viewed here.

Daoine agus Áit: Connecting our Communities is an iCAN project co-funded by the National Museum of Ireland and the Heritage Officers for counties Clare, Galway and Wicklow, with grants from the Healthy Ireland Keep Well Campaign & Creative Ireland.