You are here: HomenextTopicsnextNaturenextWhy go to Glendalough? (published 1949) 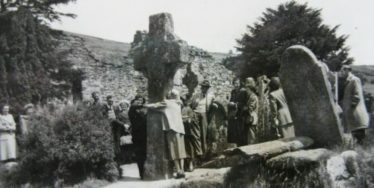 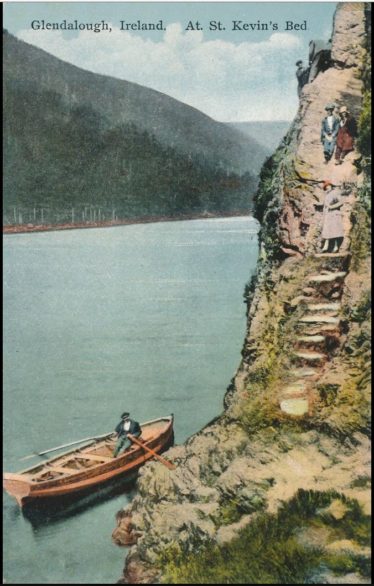 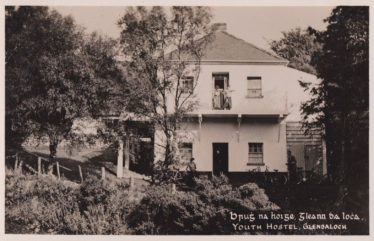 zoom
The Glendalough Hostel in the 1950s
Courtesy of P. Reid

This valley must surely be a place of pilgrimage

This valley must surely be a place of pilgrimage; it is the spiritual home of Dublin’s Patrons, Saints Kevin and Laurence, receptacle of their sacrifices, engraved with the seven symbols of their love. Certainly the crowds are here – see them streaming down the road this Sunday, Feast of Kevin, in June, a long progression of buses, cars and cyclists.

An ancient ritual to honour the Saint?

Then they take to the boats, cross the lake and climb precariously to the little hole in the cliff? St. Kevin’s Bed. Is this an ancient ritual to honour the Saint? Do they pray there? Well, perhaps under cover of the “three wishes” you are told to have while crouching in the narrow smooth-rocked cave, some romantic boy or girl may ask for victory or vocation, to be a Saint like Kevin or to die a martyr for Ireland and the Faith. Maybe.

All that appears is vulgarity

All that appears is vulgarity, very close to mockery. No, even to-day no one is thinking of Kevin; even on this one day you will not hear the solemn intonation of the Rosary wafted from the boats gliding quietly across the lake in the evening; nor will you find any of the Seven Churches filled with worshippers to honour his work or seeking inspiration in his memory.

There is a kind of dance-hall happiness in the air

To-day, like every other day of the tourist season, there is a kind of dance-hall happiness in the air, restless and self-centred; this crowd would be more at home in Bray, with concrete esplanade and saxophone blaring nonsense from the hill. This fastidious valley really adds nothing to their self-conscious merriment, their joy is not in it but in themselves, so it seems to withdraw its secrets from their unsympathetic approach, to frown resentfully on their unconscious insults and to rebuff their well-meant but undiscerning heartiness. They could enjoy themselves as well elsewhere? I wish they would.

Insensible to the atmosphere of prayer

The ” civilisation” that dominated our country during the 18th and 19th centuries robbed our more educated classes of love of holy places. It professed to despise the material aids to religion as superstitious and idolatrous. Its adherents became insensible to the atmosphere of prayer enshrined within lichened walls; they scorned the sanctity in bones that had even upheld the living spirit of a Saint. And so they preserved our holy places – if at all – as queer museum pieces to grace their lawns and mansions with a stolen antiquity, or as tourist attractions for a new hotel.

Bodies of the Blessed were neglected or destroyed

The tombs, the bones and bodies of the Blessed were neglected or destroyed, so that there are scarcely any left now in reverence. Clonmacnoise lies lonely and unhonoured within the wide, smooth flowing curve of the Shannon; Cashel stands aloof, cold and windswept on its hill, while here in Glendalough, the Cathedral and Kevin’s Kitchen ring continuously with the loud guffaws and flirtatious cackles of the “trippers”. This Glendalough, built by Nature and perfected by Grace to stir the soul to deep feeling and the urgent longings for Infinity! It calls to you for reverence; in return it will inspire you.

It will take your breath away by its charm

Come on it first from over the heather hills and young growing forest, where Derrybawn Mountain meets Lugduff, and it will take your breath away by its charm. Maybe it is late spring as you look down over the wide-domed tops of the oaks, tinged light brown and yellowish-green; the outer buds are breaking gently into leaf; the strong grey arms upholding them are still clear beneath. The birch and hazel straggle among the crevasses and along the shelves of the cliff below Spink, independent and undisciplined.

The dark holly and the airy rowan

They, with the dark holly and the airy rowan, are the native inhabitants, following naturally the lie of the land, not drawing an arbitrary line across the mountainside as the forest of spruce and Douglas fir does, straight and artificial, like the American state boundaries that follow stiffly the lines of longitude. But the Scots pine on Camaderry are almost naturalized, nearly inevitable elements of the scene. From here the Upper Lake, the dominating feature, looks genial and alluring.

Glendalough is a moody vale

But Glendalough is a moody vale and in her stirrings of our spirit she does not leave unmoved the darker emotions, the fear of evil and the pangs of loss, or the melancholy of weariness and futility. This long, dark lake is never merely drab, even as you stand watching her by the outlet on a gloomy cold day, no more than she is ever merely pretty at her best.

The blackness of the waters

Now she is forbidding, impatient of frivolity, demanding strength and endurance from her admirers. The strange, unfailing line of foam, lying a few yards out from the right shore, emphasises the blackness of the waters as it runs unbroken the whole mile length of the lake. The waves clipclop unrhythmically under the rocky edging, not like the sea waves regularly spaced; these are irritable waves, fast-stuttering with anger. Though on a quiet sunny day this same irregularity gives an innocent effect of irresponsibility – a happy childish chatter.

St. Kevin knew what he wanted

St. Kevin knew what he wanted. Here was the very place to drink in the calming beauty of the all-pervading Presence; here was the place to feel his own insignificance, perched like a sand-martin in front of his rocky dug-out in the 600-foot cliff face; here it was easy to fear the Divine wrath as black squalls swept down the valley; this was the place to vanquish the  “Spirits of evil in high places”, and soar, like the peregrine, on the winds of the Spirit “that bloweth whithersoever it wills “.

He wanted to disappear forever into the solitude of the soul

He sought only God; when he had found Him, as always happens, other men began to find him. He wanted to disappear forever into the solitude of the soul – and a city grew up around him. But Glendalough proved capable of containing a university city, and remaining a solitude.

Far up the valley there is an unchristian land

There was no means by which a multitude could settle on the sheer face of the southern shore. Kevin could always retire there to his eyrie, for peace and prayer. Far up the valley there is an unchristian land, never sanctified by the monastic chant. Past the white strand at the far end of the lake you come to a desolate waste, blighted and unproductive, a place where massive granite boulders have been hurled about in fury, where no trees grow and no man lives. The lead miners’ ruined cottages add now to the desolation.

This is the kind of place where the evicted spirits might wander lonely, awaiting jealously their return to the dwellings, swept and garnished, from which they were driven long ago. In front and at your side the great white gravel dumps beard the arched mouths of the mine shafts and trail down the rough male chest of the mountains; within the fascinating and mysterious depths of these tunnels strange noises sound, murmurings and the drip of slimy waters. Even here St. Kevin must be master. Is not this all his valley?

Still, let us hurry back along the lake to the round tower, where even the graveyard looks more reassuring; there the dead are crowded, confident of his protection.

What is the use of having a patron of the diocese if the vast majority of the “patronised” know nothing of his spirit? There is so little to be learned about Kevin from the books that it is impossible, I think, to be inspired by him unless you visit and listen to the message of the valley that helped to sanctify him and was forever made holy by his presence. St. Kevin is Glendalough and Glendalough is almost all we know of Kevin now – and it is enough.

This article originally appeared in the Irish Monthly in 1949.