You are here: HomenextPlacesnextGlendalough in 3D

The EU ‘3D-Icons’ project aims to create highly accurate 3D models and a range of other materials (images, texts and videos) of iconic and internationally important monuments and buildings across Europe and to provide access to this data on line.

Over 130 monuments and buildings from Ireland are featured in this digital collection, which appears here courtesy of the Discovery Programme and 3D Icons.

In addition to making content available on line, this data has the potential to be of benefit to such sectors as education, tourism, the creative economy, conservation and monitoring of cultural heritage sites.

Glendalough extensive monastic settlement is located in a  glacial valley consisting of two lakes (the Upper and Lower Lakes) which explains the Irish place name Gleann dá Locha ‘the valley of the two lakes’. The first monastic community probably began with a  small hermitage founded by St Kevin (Cóemgen) in the early 7th century but as the monastery became more powerful it extended its imprint throughout the whole valley. Such early Irish monasteries functioned as centres of royal and ecclesiastical power, locations of monastic communities, centres of learning and craft-working, and the focus of trade. 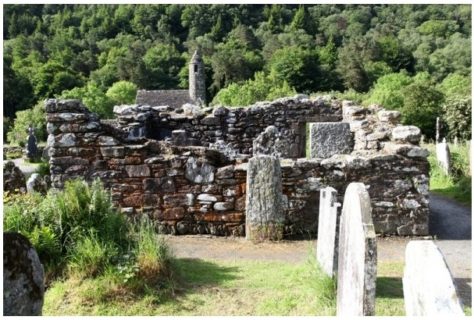 The visible monuments at Glendalough and those detected through remote sensing include stone churches, a stone cathedral, an undecorated high cross, a decorated ‘market’ cross, a round tower, decorated grave slabs, a unique gateway and the earthen enclosure that defined the central monastic precinct. These monuments date to the 12th century or earlier. Undoubtedly wooden buildings, pathways, churches or habitations, also existed but have left no visible trace. During the 12th-century reform of the Irish church, Glendalough was given the status of a bishopric and this is likely to have led to large-scale stone building. By the 13th century the abbacy and lands of Glendalough had been granted to the archbishop of Dublin.

Follow the links below to view Glendalough’s historic buildings and statuary in 3D:

The Round Tower is to the NW of the cathedral on slightly higher ground within the main graveyard with its round-headed granite doorway facing the cathedral. Built on two offsets, it had five floors above the entrance carried on beams set into beam-holes.

There are four trabeate windows at various levels and a further four at the cardinal points, just below the reconstructed conical cap. A rectangular channel runs right through the thickness of the wall just below the doorway.

Round towers are a typical feature of early medieval Irish monasteries and are likely to have been built mainly between the eleventh and thirteenth centuries AD. They symbolized a monastery’s power and were probably used as bell-towers.

To view the Round Tower in 3D, click here.

The remains of a two-storied gateway are the only such building to survive in Ireland. It consists of a square building with two round granite arches and antae in the north and south walls. Some of the paving of the causeway through the gatehouse is still intact. 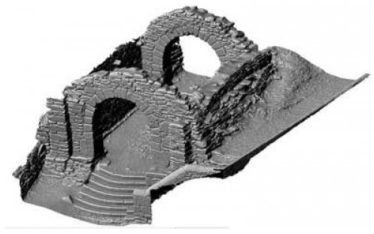 A second floor is indicated by the presence of corbels in the interior. A possible section of the enclosure wall adjoins the NE corner. A slab on the W wall is incised with a Latin cross probably marking the entrance to the innermost part of the monastic city.

The cathedral is the largest and most imposing structure at Glendalough and is situated in the SE division of the main enclosure on a small plateau overlooking the junction of the Glendasan and Glenealo rivers. It was reputedly dedicated to SS Peter and Paul  and ceased to function as a cathedral when the diocese of Glendalough was united with Dublin in 1214. 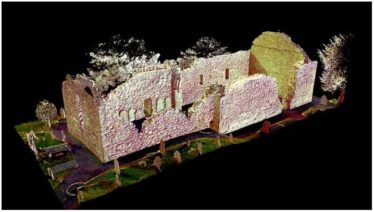 It consists of a multi-period nave and chancel church with a sacristy. The earliest phase is evident in the cyclopean masonry in the nave walls while later rebuilding probably took place around AD1100. The decorated chancel arch, sacristy and north doorway were added towards the end of the twelfth century. The nave has antae (projecting stones) at both E and W. The W door has inclined jambs, simple flat architraves and a round relieving arch above the lintel. There are five cross-slabs placed against the inner N wall of the chancel, one of which may commemorate Muirchertach Ua Cathaláin, king of Clann Fogartaig, slain at the battle of Móin Mór in AD1151.

Situated on a shelf above the S shore of the Upper Lake, surrounded by steep cliffs and only approachable by boat. The most westerly of the churches at Glendalough it was partly reconstructed in the 12th century. A small single-celled rectangular structure with a twin-light window in the E gable (similar to St Saviour’s) and a doorway with inclined granite jambs at the W which originally had a flat lintel. Two fragmentary Latin crosses and several plain graveslabs are located near the church. To the W is an associated platform where evidence of wattle huts connected by paved paths was found in an excavation conducted by Francoise Henri in 1956-8. 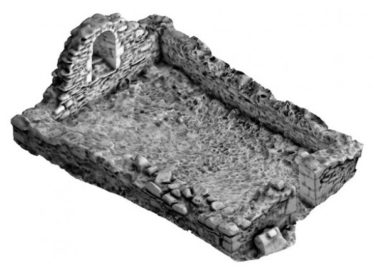 The huts were apparently destroyed by an avalanche of slabs and a wooden house resting on a base of stones was subsequently built which had finds dating from the late 12th to the late 14th or 15th century. A charcoal layer was noted here and other charcoal-burning platforms have since been identified in this area.

Reefert Church is at the SE corner of the Upper Lake near Poulanass brook. Reefert Church (from Rígh Fearta ‘the burial place of kings’) has been extensively restored and consists of a nave and chancel with a simple chancel arch. The nave was lit by two round-headed windows in the S wall and the chancel by a similar window in the E gable. There is an aumbry in the E end of the S wall of the nave. The church was originally within a cashel (stone enclosure). 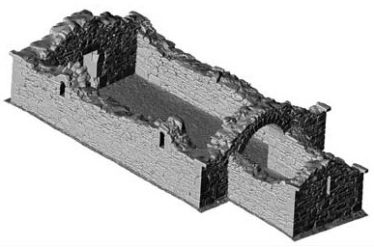 Situated SE of St Kevin’s church in the NE corner of an enclosure defined by a drystone rubble wall. These mark the foundations of a small nave and chancel church. 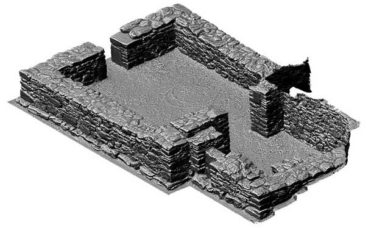 Features which are still evident include a W door, a narrow chancel opening, a door in the S wall of the chancel, which may have led to a sacristy, and the foundations of a stone altar. The church is possibly dedicated to St Kieran, founder of Clonmacnoise, and there is a possible reference to its burning in the Annals under the year 1163.

The Priests’ House is situated within the main graveyard to the SW of the cathedral. A small rectangular building possibly of twelfth-century date, it has been subjected to considerable reconstruction. 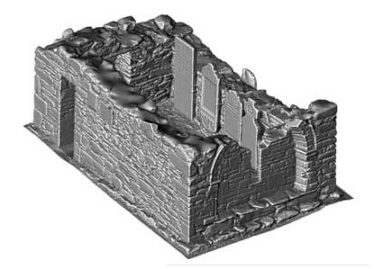 There is a Romanesque arched recess in the exterior of the E wall and a door in the S wall features a fragmentary tympanum with three figures holding a bell, a staff and a book. The function of this building is uncertain. It may have been a reliquary church. It became known as the ‘Priest’s House’ as priests of the parish were buried there in the 18th century.

To view the Priest’s House in 3D, click here.

St Kevin’s Church is the only stone-roofed building to survive at Glendalough and it incorporates a croft between the barrel-vaulted ceiling and the roof. It was probably built in the eleventh or twelfth century and was originally a small rectangular single-celled church with a miniature round tower belfry.

A later chancel and sacristy were added to the east. The roof of the oratory is steeply pitched and corbelled while the outside of the roof stones are roughly dressed to the slope. The only access to the belfry was through the croft which in turn was accessed through a small square hole in the vault. 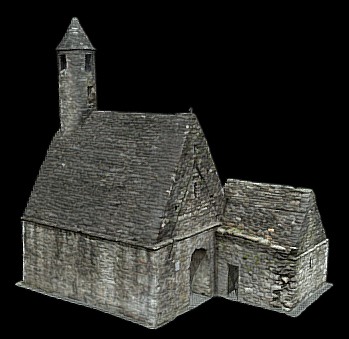 The belfry was at one stage likened to a chimney and so the church became known as St Kevin’s Kitchen.The existence of a wooden floor is indicated by beam-holes on all the walls at the springing of the arch. This room was lit by a small square-headed window. The foundations of the chancel are visible but the stone-roofed sacristy at the NE angle of the church still stands. 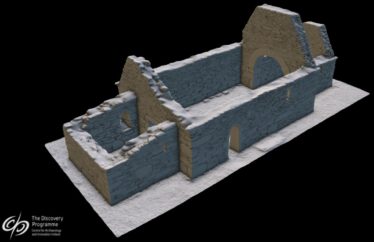 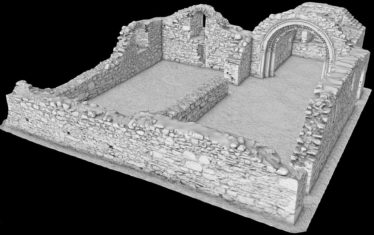 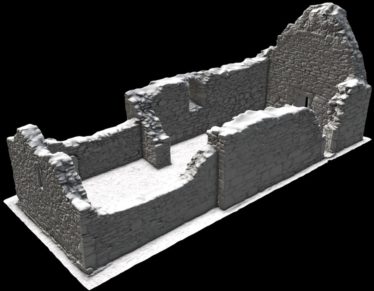 To view the Market Cross in 3D, click here and here.

High cross originally located at Reefert’s Church at Glendalough, now located in the Visitor Centre. Possibly dates to the 9th or 10th century, with rebated edges.

To view the High Cross in 3D, click here. 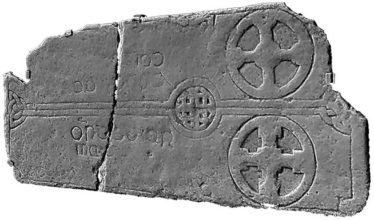 Incised Linear Latin cross slab originally located at the inside of the Cathedral at the main cemetery site of Glendalough, now on display at the Visitor Centre. An early medieval date, with small Latin cross with expanded T-bar terminals and two inscriptions, one of which may read OROIT DO DIARMAITT ‘A prayer for Diarmait’.

To view the Cross slab in 3D, click here.

Recumbent ringed cross slab originally located a the Lower Lake site of Glendalough, now on display at the Visitor Centre.

To view the ringed cross slab in 3D, click here. 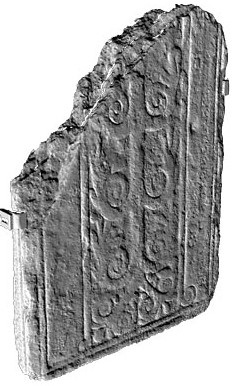 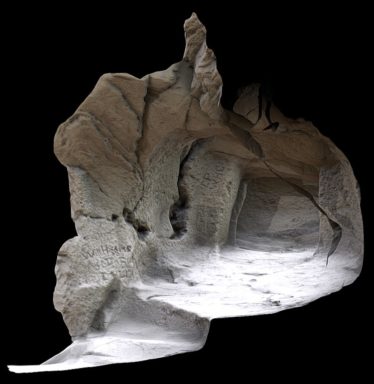 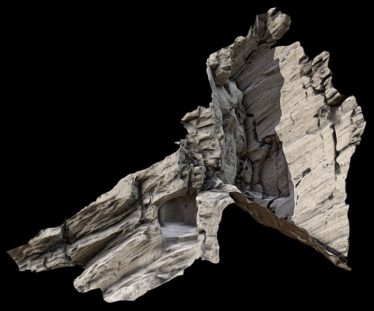