You are here: HomenextPlacesnextGlendalough on Stamps

The valley and monastic ruins of Glendalough have always been one of Ireland’s most popular and instantly recognisable ancient ruins and beauty spots.

Images of Glendalough have featured for centuries in paintings and etchings, then in books, magazines and tour guides. Since the late 19th/early 20th C it has featured in many photographic and postcard collections and then, more recently, on stamps. 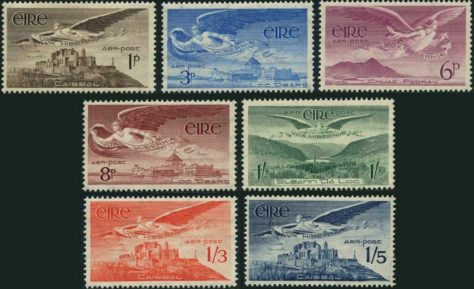 It is small wonder then that this wonderful valley should be chosen time and time again to showcase Ireland to the world. This article will look at Glendalough as featured on postage stamps issued by the Irish postal service An Post.

The first time Glendalough featured on an Irish stamp was in 1949. It featured as part of a series of four airmail stamps featuring the Flight of the Angel Victor, messenger of St. Patrick, carrying the ‘Vox Hiberniæ’ (voice of the Irish) around the world. The four provinces were represented – Glendalough in Leinster, the Rock of Cashel in Munster, Lough Derg in Ulster and Croagh Patrick in Connaught. 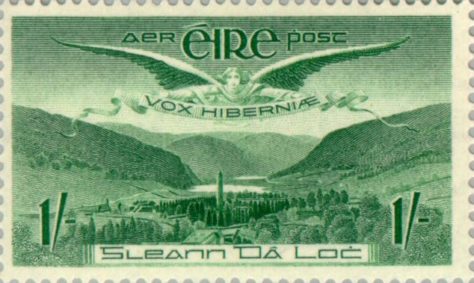 The Glendalough ‘air post’ stamp, issued on April 4th, carried a value of one shilling and it measured approx. 41 by 25mm. It was designed by R.J. King and initially recess-printed in London by Waterlow and Sons Ltd. and then by De La Rue & Co. in Dublin from 1961. The stamp carries a multiple ‘e’ watermark. 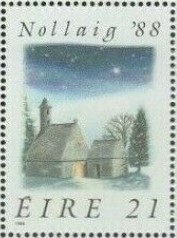 The stamp is a 30 by 40mm, offset lithography print on chalk surfaced paper and carries no watermark. Sold with a value of 21p (Irish penny), the print ran to 14 million stamps.

Issued to celebrate the 75th anniversary of the National Monuments Act this beautiful ink & pen drawing of Glendalough’s iconic round tower was part of a set of four drawn by artist Michael Craig. 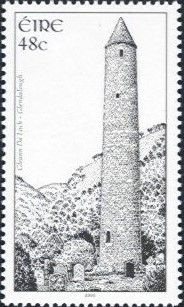 Once again each of the four provinces were represented in these lithographic prints – Glendalough in Co. Wicklow, Kilmacduagh in Co. Galway, Clones in Co. Monaghan and Ardmore in Co. Waterford.

They were issued on July 27th 2005, measuring 30mm by 52mm, and the stamps carried a postal value of 48c. Featuring offset lithography on chalk surfaced paper, the print run was 570,000.

This stamp was issued to commemorate the 1400th anniversary of the death of St. Kevin of Glendalough. 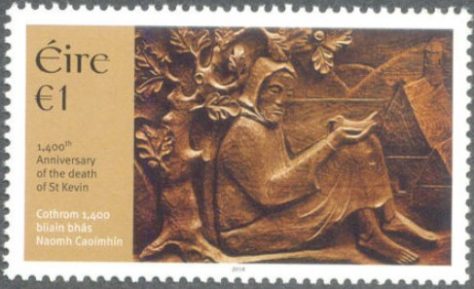 The multicoloured stamp was issued on May 31st 2018 and measured 51 by 30mm. A limited print run of 122,000, featuring offset lithography on chalk surfaced paper, the value of this stamp was €1.

Unveiled at the Glendalough Visitor Centre, the stamp’s artwork, designed by Vermillion Design,  is based on a woodcarving by Imogen Stuart with calligraphy is by Tim O’Neill. 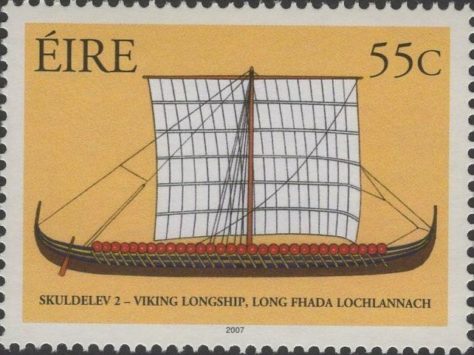 A stamp was issued to celebrate the reconstruction of a Viking war ship, called the ‘Sea Stallion of Glendalough’, so-named for the timbers in the original that were felled outside of Dublin in the summer of 1042, possibly in Glendalough.

This stamp has a tentative link to Glendalough, but still merits a mention.

These are all of the stamps currently known to the author and I would be grateful for information on any other Irish stamps featuring Glendalough. Please contact us at glendaloughheritageforum@gmail.com

All images courtesy of Pat Reid.