A short distance to the west of Reefert church are the remains of a roughly circular stone hut, the existence of which is but little known. The site is a lofty spur of the mountain jutting out and giving a view over the lake and down the valley.

The walls are 2 feet 9 inches to 3 feet in thickness and vary in height from 1 foot 3 inches to 3 feet. The diameter inside is 11 feet 3 inches from east to west and 10 feet 6 inches from north to south, a portion of the wall to the south-west is faced with stones 3 to 4 inches thick set on edge, the largest is 3 feet long and 2 feet over the ground.
The narrow doorway is on the east, looking down the valley; a tree has displaced the stones of the north Jamb, but the other jamb is uninjured for 2 feet 6 inches in height. The walls of the hut batter on the outside and slightly overhang on the inside, and although there is no other indication of how it was roofed, it is probable that the roof was of stone, built on the beehive plan, and similar to those of the early monastic settlement on Skellig Michael Island, in county Kerry. 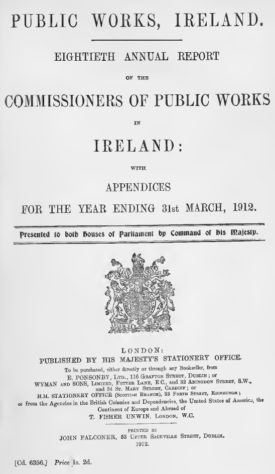 The remains are traditionally called St. Kevin’s cell, and may be the hut stated in his life to have been built in a narrow place between the mountain and the lake. The interior seems to have been cleared at some remote period, and a small rough cross erected in the centre probably denotes a burial. The fragment of this cross now standing is 20 inches above the
ground.
An ancient track leads to this cell from the direction of Reefert, the last 140 feet of which are very steep, and there are stones scattered about, the remains of the rude steps in the ascent. This stone-built cell should not be confounded with the cell in the natural rock already described, and also associated with, the name of St. Kevin.

Near the eastern shore of the upper lake, not far from Reefert church, and about midway across the valley, are the remains of a stone fort very similar in construction to those in the west of Ireland. It is much dilapidated owing to the usual causes – removal of stones, growth of trees, and the depredations caused by rabbit hunters.
It was built in dry masonry composed of thin slabs of stone of the mica schist formation laid horizontally and carefully fitted in the manner seen at Staigue and elsewhere. The walls vary from 8 to 10 feet in thickness and are now about 4 feet in height. The outside diameter is 67 feet. On the east side four or five small flags may be noticed set vertically in the face of the wall. The position of the entrance is not evident, the only gap is in the south-east side. This Caher and the circular stone huts, of which there are traces, are evidence of a very early occupation of the valley.

This building was erected a short distance north-west of the graveyard in which the round tower is situated, and is dedicated to the Blessed Virgin. Dr. Petrie was of opinion that this was the earliest church erected in the lower part of the valley. It may not be quite as early as Trinity church.

The nave is the older part, the chancel being an addition. The nave measures 32 feet in length, and is reduced in breadth from 19 feet 11 inches at the west gable to 19 feet 5 inches at the chancel end of the nave. (See Fig. 9.) The masonry in the west gable is of two periods; there is a great difference in the massive close jointed work of the masonry in the lower portion and the rougher work above it. (See Fig. 10). The walls are from 3 feet 2 inches to 3 feet 7 inches in thickness, and have an external slope or batter of 1 and a half inches up to a height of 6 and a half feet and the side walls lean slightly inward. The east and west walls are 3 feet 2 inches thick. 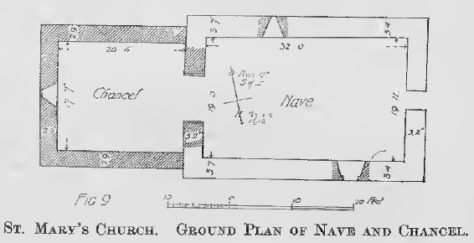 The doorvway in the northern wall is a later insertion. The massive west doorway (see Figs 11 and 12) is 6 feet 7 inches in height, and is 2 feet 11 inches wide at the sill tapering to 2 feet 6 and a half inches at the lintel. The sill and lintel are each in a single stone, and each jamb is formed of three blocks; all these are of granite, and extend through the entire
thickness of the wall. This doorway presents some curious features, such as the pattern cut on the soffit of the lintel; this is a diagonal cross or saltire formed of three sunk lines circularly expanded at the centre and ends (a similar pattern repeated four times may be seen on a memorial slab now preserved in St. Kevin’s House).

Another feature is the early form of architrave cut on the lintel and jambs ; this is 5 inches wide at the top, widens to 8 inches at the bottom and stands out 5/16s of an inch. A line is cut on the lintel and returned at the ends, over the architrave, thus suggesting an incipient hood. Internally the doorway has a singular feature in the slightly sunk mouldings on the middle stones of the north jamb. (See Fig. 11). 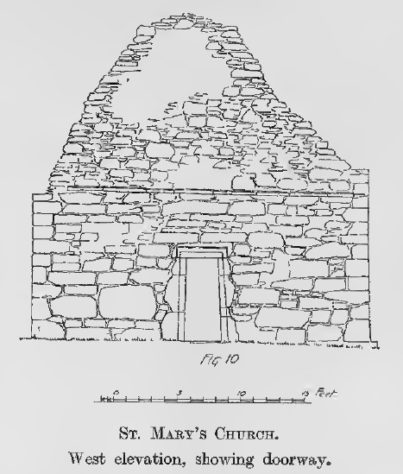 These extend for a length of 2 feet 4 inches, and consist of a small roll on the edge and a
fillet and chamfer on the flat, the full width being 2 and a half inches. There is also a trace of an architrave line on the upper stone of the south jamb. The sill also is noteworthy in being wider than the thickness of the wall, and having its upper surface brought to this thickness by a rebate at each side.

All the stones of this doorway are very closely jointed and carefully surfaced. The internal face of the south jamb is extensively flaked off, and here as well as in the south-west angle of the nave the effects of Are are observable.
The height of the side walls and commencement of the slope of the roof is marked on the west gable by a string course 11 and a half feet above the door sill, and this string is not horizontal, but slopes as much as 5 inches towards the south. The south window is 3 feet high by 10 inches in width, round headed and splayed. It has a small hood moulding above. Only the piers of the chancel arch remain ; they are plain, and rest on a small chamfered plinth.

There is a peculiar depression in the face of the nave wall about 3 feet west of the chancel, and 12 feet above the floor level, the position in which a rood beam would be placed in later times. In the external face of the south wall there is a deeply cut horizontal groove 1 and a half inches wide and 7 feet 3 inches long. It is 10 feet above the ground, and ends 4 feet from the south-east angle of the nave. It was intended to take the covering of an abutting roof which has disappeared. 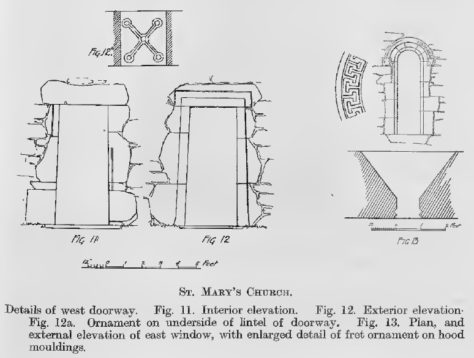 The chancel, which is of later date and is not bonded into the nave, is 20 feet 4 inches in length, and is of the uniform width of 17 feet 7 inches ; it contains the base of an altar, now formed of rough stones, 6 feet 2 inches long by 3 feet 6 inches wide, and placed 1 foot south of the centre. On the altar is placed a bullaun stone, the hollow of which is 10 inches in diameter and 3 and a half inches deep. The masonry of the chancel exhibits careless construction, the offset or base at the west end being sloped as much as 7 inches out of the horizontal in the width of 23 feet.

The east window measures 3 feet 3 inches by 11 inches, and is round headed and splayed to 3 feet 11 inches inside. The jambs have a chamfer and V groove, and there is a hood moulding ornamented with a fret pattern and ending in animal heads almost worn away. (See Fig. 13.) The external jambs and hood of this window are formed of the same kind of stone as that used in the mouldings of the chancel arch and east window of the cathedral, viz., a soft fine grained granite of this locality.

In the chancel are two ornamental slabs of mica slate incised with crosses of simple design and around the church are a number of graves having horizontal stones and erect slabs or crosses at the head. Some of these also bear crosses, and are noted under the heading of ornamental stones. See Figs. 87-92, page 77.