You are here: HomenextPlacesnextSeven Churches (published in 1795) 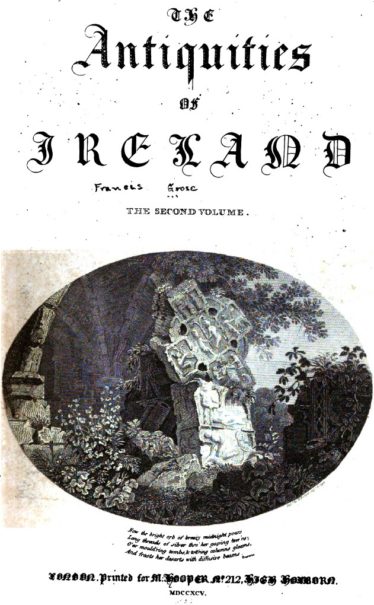 zoom
Cover of The Antiquities of Ireland
Courtesy of Google Books 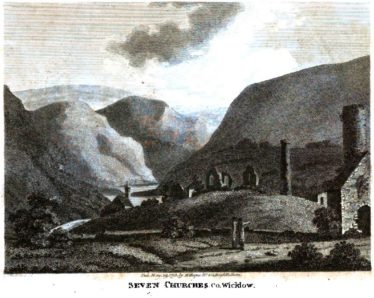 The valley of Glendaloch, in which the Seven Churches are situated, is in the barony of Ballynacor, twenty-two miles south of Dublin, and eleven north-west of Wicklow.

It contains a greater treasure of genuine ecclesiastical antiquities than is to be found in any other part of Ireland; too numerous to detail in this place, but they have been minutely described in the antiquities of Ireland by the writer of these pages. The Seven Churches are, the Abbey, the Cathedral, St. Kevin’s Kitchen, Teampall na Skellig, Our Lady’s Church, Trinity Church, and the Ivy Church.

The number seven was mystical and sacred

The number seven was mystical and sacred, and early consecrated to religion; it began with the creation of the world, and all the Jewish rites were accommodated to it: it is also found among the Bramins and Egyptians. The Greek fathers extol its power and efficacy, and the Latin, as usual, apply it to superstitious purposes. The following extract from Archbishop Peckham’s Constitutions, made at Lambeth, A.D. 1281, will evince the sentiments entertained of it in these islands: ” The Most High has created a medicine for the body of man, reposited in seven vessels, that is the seven sacraments of the church. There are seven articles of faith belonging to the mystery of the Trinity. Seven articles belonging to Christ’s humanity. There are seven commandments respecting man; seven capital sins, and seven principal virtues.”

The Irish entertained a similar veneration for this number, witness the seven churches at
Glendaloch, Clonmacnois, Inniscathy, Inch Devien, Inniikealtra, and the seven altars at Clonfert and Holy Cross.

On entering the valley from the east, the Ivy church first meets the eye; the belfry is circular, and is the first attempt towards uniting the round tower with the body of the church.

The Priory of St. Saviour

South-east from this is the priory of St. Saviour, and near it a stone-roofed chapel, the cemetery of St. Kevin, being a small room, occupied by his tomb, which also served his votaries as an altar. The sculptures on its western portal are remarkably curious and interesting, and uniques in this kingdom.

St. Kevin’s kitchen is a stone-roofed oratory, the ridge of the roof thirty feet high ; and at the west end is a round tower forty-five feet high, approximating, but not completely joined to the church. Trinity church has also part of around tower; and the insulated round tower near the cathedral is one hundred and ten feet in height, at the bottom fifty-two round, and the walls four feet thick.

Teampall na Skellig, or the church of the rock, is in the recess of the southern mountain; St. Kevin’s bed is above it, excavated from the living rock, and hanging over a lake. To this place the pilgrims resort; and nothing can be conceived more frightful and dangerous, the least flip precipitating the adventurer into the lough below.

The Picturesque Scenery of the Glen

The number of churches and their ornaments, and picturesque scenery of the glen, amply repaid the writer the many hours he employed in viewing and describing these venearble remains.
This View was taken from an original drawing, by Dr. Wynne.

This article is an excerpt from the book ‘The Antiquities of Ireland: The Second Volume’ by Francis Grose. Printed in London by M. Hooper in 1795.