You are here: HomenextPlacesnextSt. John's Church of Ireland, Laragh 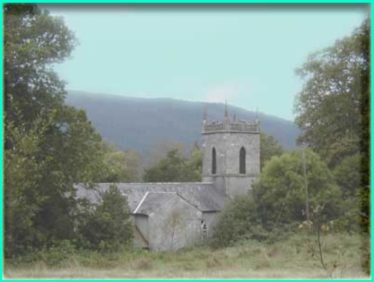 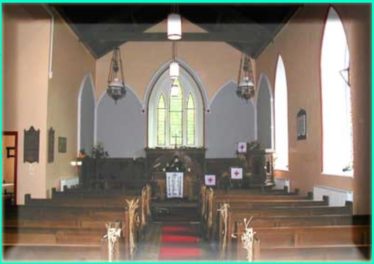 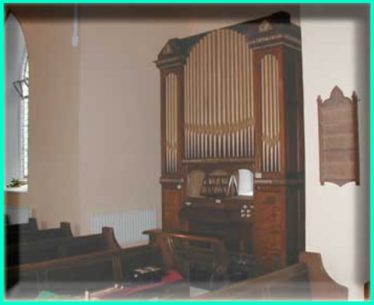 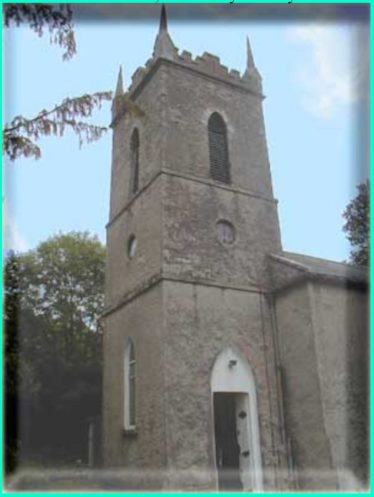 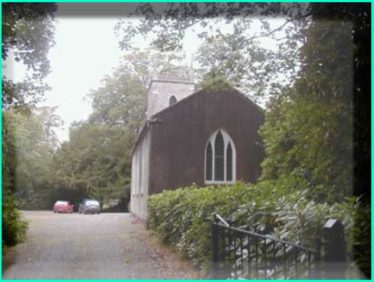 This is an account of some of the history of the little Church of Ireland church in Laragh, dedicated to St. John, which is completely hidden from view by the woodland in which it is situated.

At the sharp left turn off the road from Laragh to Annamoe very shortly after Laragh, that is called  the Oldbridge Road and goes pretty well to Lough Dan from Laragh, there is the notice board telling of its existence, and about fifty metres up that road on the left is the gate to the church.  There is a finger-post at the junction too, so you can’t possibly miss it!  We in the parish would encourage all who are in the district on a Sunday morning and who are at all church-minded to turn up to join us at 9.15, a good time to prepare for a days walk in the hills.

Glendalough and Laragh are in the ancient parish of Derralossary which is on record from at least the thirteenth century.  The present church on that foundation had to be closed by the Church of Ireland in the late 1960s because of population change, and can be seen as a roofless ruin high up to the left some couple of kilometres to the South of Roundwood on the road to Glendalough.  It has a fame today because its graveyard contains the remains of Erskine Childers, who was President of Ireland and died in office.

Some interesting details of the origin of St.John’s are given here, having been gleaned from old records held in the Library of the Representative Church Body of the Church of Ireland in Dublin.

In the year 1843 a Subscription was opened by the parish to fund the building of ‘the new church in Laragh’.  As will be seen later the need for a church was related to the considerable size of the parish and the difficulty in those days of getting around.  It was to be a Chapel of Ease, meaning that it was for the convenience, or ease, of the parishioners within its immediate vicinity.  It can be imagined that the travel to the parish church, seven kilometres away, by horseback or horse-drawn vehicle, would have been tedious, and perhaps reserved for the more wealthy.

The sums subscribed are interesting, and seem to be very small in modern terms, but it must be realised that in the over a century and a half the value of money has been deteriorating.  We know the effects of ‘inflation’ even in our own relatively short experience.  The largest contribution was £50 (€63.50), and there were only two of these.  The total number of subscribers was 125.  The value went as low as 2/6 (two shillings and sixpence, 12 1/2 pence in newer terms, 16 cents in Euro terms).  Those highest subscriptions were from local landlords; but the list by no means was only local.  For instance ‘Her Gracious Majesty Adelaide Queen Dowager’ was there, giving fifteen pounds (€19)!  I doubt very much if she knew where the new church was to be, but fifteen pounds was not to be sneezed at!  The total collected was four hundred and twenty pounds ten shillings and ninepence (about €534).

The church was built.  I have found no account as to the adequacy of that sum of money, but it may well have been plenty.  Just think of this.  The lady engaged to clean the church in its early days of use did it for the princely sum of one pound (€1.27) a year!

In the account of the Military Road reference can be found to the barracks that were built along the way.  One was in Laragh, just behind St.John’s, and it had only short use along with its companions in the other valleys traversed by the road.  When it became disused it was reduced somewhat in size and converted to the present Laragh Castle, and it is very likely that surplus stone was used for the church.  It was and is a very simple structure, like many rural Church of Ireland churches.  It still is as it was built.

In the Name of God, amen.

Whereas a chapel has been erected out of funds contributed for that purpose by several pious and well-disposed persons in the townland of Laragh in the Parish of Derralossary for the ease of such inhabitants of the same as by reason of distance cannot attend the parish church, and such chapel is adorned and furnished with all that is decent and necessary for the worship of God.  And whereas the Incumbent and Churchwardens of the said parish and the parishioners adjacent to the said chapel have requested of us to separate the said chapel from all common and profane uses and to consecrate and dedicate the same to the service of God we therefore Richard Chenevix by Divine Providence Lord Archbishop of Dublin willing to comply with their pious and religious desire do hereby forever separate the same from all common and profane uses and do consecrate devote and dedicate the said chapel to the worship of God and the celebration of divine service by the name of St. John’s Church, Laragh, and we ordain that from henceforth public prayer be openly read in the said chapel, and the word of God sincerely preached, and baptism administered, and also that the Holy Communion be celebrated in the same, and that all other matters be done and performed which by the Law of God and the canons of the church can or may be done towards divine worship, to the Glory of God, and to the edifying of the church.  And we ordain and decree for us and our successors Lords Archbishops of Dublin that the said chapel shall be and remain a chapel of ease for such of the inhabitants of the said parish as are removed from their parish church unless the said chapel shall hereafter be lawfully and canonically erected into a parochial church, reserving to ourselves and our successors Lord Archbishops of Dublin all lawful jurisdiction of the same.  Dated this nineteenth day of September one thousand eight hundred and sixty seven.                                                      Richard C. Dublin

Another bit of history. The bell in the tower, which is rung as a call to worship, was cast in 1872, five years after the church was dedicated, and one year only after the Church of Ireland became the organisation it is today after its ‘disestablishment’.

We must refer you to the most interesting account of the building of our neighbours’ church of St. Kevin. It will be noted that the first practical moves for the buildings were, for St. Kevin’s, 1847, and for St. John’s 1843: but St. Kevin’s was ready for use in about 1851, whereas St. John’s was not dedicated until 1867. Why a very much simpler church took so much longer isn’t known. These were very troubled times in Ireland, and history would imply that the Protestant people had advantages that the Roman Catholics had not. Nevertheless, as has been revealed recently in the fine refurbishment of St. Kevin’s, its walls are of cut granite, whereas St. John’s, as a humble Chapel of Ease, has walls of rubble. Whatever the reasons for those differences we rejoice that the two parts of the Worshipping Community now in the year 2002 are the best of friends, as indeed the Christ of Christianity requires it!

The use of St. John’s church continues, we trust in the spirit of the main intent of those mentioned in the Dedication, and their successors, and in an area hallowed by centuries of Prayer and Service and Pilgrimage in the neighbouring Monastic City of Glendalough. It is no longer just a Chapel of Ease, but one of two churches in the presently constituted parish that is a union of Derralossary with Rathdrum. We continually ask God’s blessing on it for the Glory of God and the Faith of the people on their Christian Pilgrimage.