You are here: HomenextPlacesnextSt. Kevin's Bed, Glendalough (published in 1937)

The following brief notes amplify a still shorter account of the rock-cut tomb known as St. Kevin’s Bed in Antiquity for September, 1937, where the writer also records the discovery of a larger rock cut tomb known as Kelly’s cave, at Cong, which is over 50 ft. long and closely resembles in plan and design the rock cut tombs in Majorca and elsewhere.

In this account it is noted that the Glendalough cave has long been associated with Saint Kevin who founded the early Christian settlement at Glendalough and died there in 618.

Some 30 ft. above the level of the upper lake, in a rock face rising sheer from the water, is a rectangular opening about 2 ft. 6 in. wide and about 3 ft. high. This is the entrance to a short passage, only distinguished from the main chamber into which it leads by a low curved step some 4 in. high and a slight widening of the walls beyond the step.

To the left of the centre line at the far end is a well defined passage 2 ft. wide at the entrance, widening to 2 ft. 6 in., and ending in a shallow recess, marked by a gathering in of the sides and roof to form a second chamber about 9 in. deep by 2 ft. 9 in. wide, and 1 ft. 9 in. high. 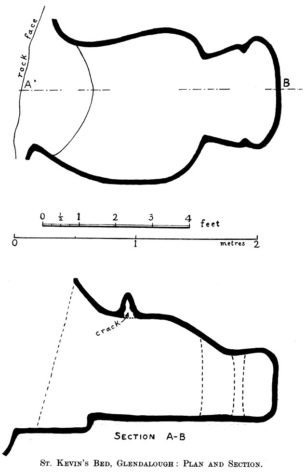 The greatest height of the main chamber is about 2 ft. 9 in. with a width of about 4 ft., the total length from the main entrance to the end of the end chamber being 6 ft. 9 in. The cave must have been practically inaccessible when first used ; but approach is now made more easy by the breaking away of part of the entrance and of the adjoining rock which is of a slaty nature.

The site and plan of this cave closely resemble some of those in the great Sicilian cemeteries at Pantalica where the rectangular openings are similarly placed in steep rock faces. The details and arrangements of the Mediterranean rock cut tombs vary considerably, but the essentials are a burial chamber and ante-chamber, the latter is often approached by a passage or ” dromos ” and sometimes separated from the main burial chamber by a second passage.

Frequently one or more lesser chambers open from the end or sides of the main chamber, and normally the various elements of the plan are separated by doorways formed by a narrowing of the entries. Steps frequently occur, usually leading down wards from the entrance. Proportions of the various elements vary considerably; sometimes the chambers tend to roundness and at others to rectangularity, in the first case the roofs are usually domed, in the second flattened.

At Glendalough the essential parts are present, but the proportions are unusual, the area at the entrance outside the step may be either a reduced ante-chamber, or, more probably, a “dromos,” the larger chamber in this case represents the ante chamber and the recess the burial chamber. Small as this last is, it would easily have accommodated the dismembered bones of one or more bodies.

In view of the striking variations in the plan of the rock cut tombs in Mediterranean areas (nearer than Ireland, in space if not in date, to the so far unknown prototypes), the slight abnormality of the Glendalough cave need cause little surprise, indeed scarcely any form which contains the elements can be termed abnormal. One type at Pantalica and elsewhere even combines the ante chamber and dromos into a single passage leading to a comparatively large burial chamber.

It seems to be a reasonable suggestion that the funeral ritual which demanded these specialized tombs was itself undergoing development and change, a deduction which might equally be drawn from the many variations in type – especially in Ireland – of the megalithic graves, the direct descendants of the rock cut tombs, in countries where soft easily worked rock was rare or non-existent.

More surprising, and of the greatest interest, is the striking contrast between the small Glendalough cave, and the much larger one of different type at Cong. The existence of the two types in Ireland probably indicates that the groups of early invaders who brought the Megalithic Civilisation to Ireland may have been widely separated in either space or time or both. 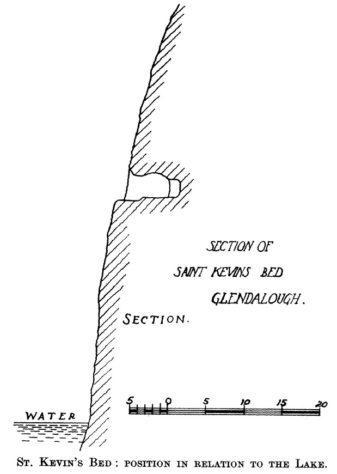 There is some evidence for the existence of occasional rock cut tombs of similar types in Brittany, and others in the Marne area of N. France are closely related; while they occur all round the Mediterranean, wherever suitable rock is to be found. The general problem of their origin and distribution has recently been dealt with by Mr. H. J. E. Peake (in Vol. 81 of Memoirs and Proceedings of the Manchester Literary and Philosophical Society, Session 1936-7, pp. 43-47) : his paper is illustrated with a few simple plans ; other plans of Sicilian tombs will be found reproduced in The Stone and Bronze Ages in Italy and Sicily (1909), by T. Peet, pp. 436, 440, 446, 454 (see also pp. 233, 234).

Precise dating of more or less isolated examples is impossible, especially in the complete absence of grave contents, but there need be no hesitation in assigning the origin of St. Kevin’s Bed to the Bronze Age.

Until quite recently no rock cut tombs were known in Britain or Ireland, but the two examples here recorded complement the recent recognition of the fact that the chambers cut in the Dwarfie Stane at Hoy in Orkney represent an orthodox tomb of Mediterranean type.

I must record my obligations to Mr. Liam Price and Mr. Farrington for making a fresh plan of the cave, and to Mr. H. G. Leask for supplying the small scale section shewing its relation to the lake, made by the late H. S. Crawford about 1910.