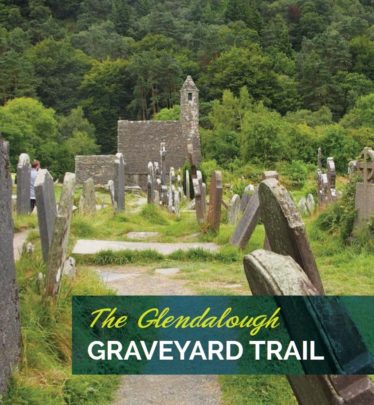 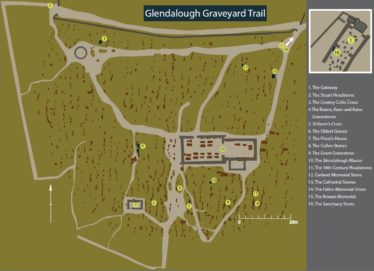 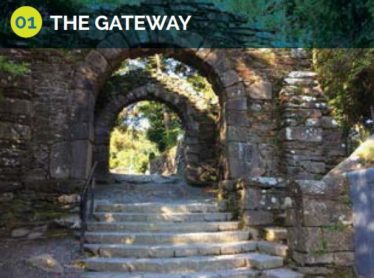 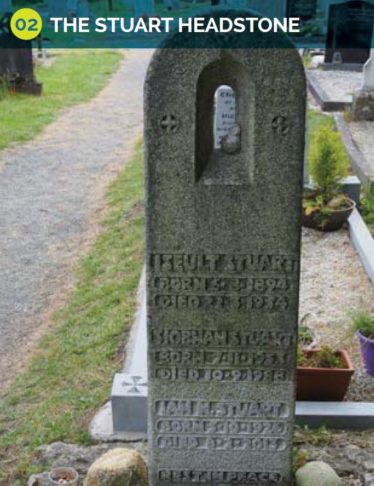 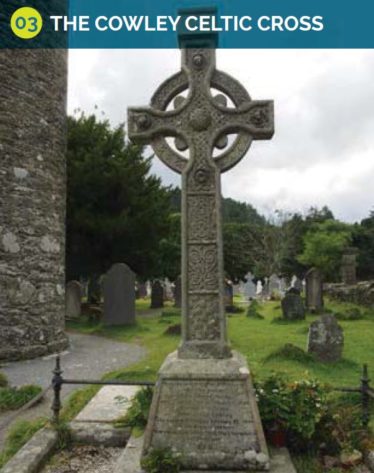 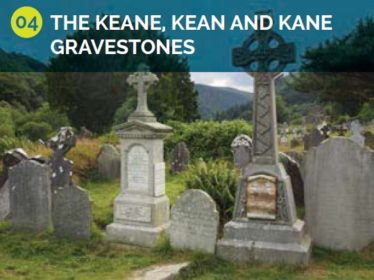 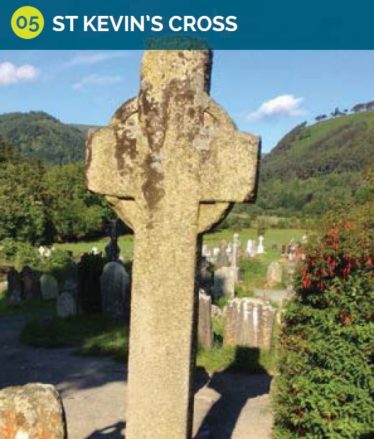 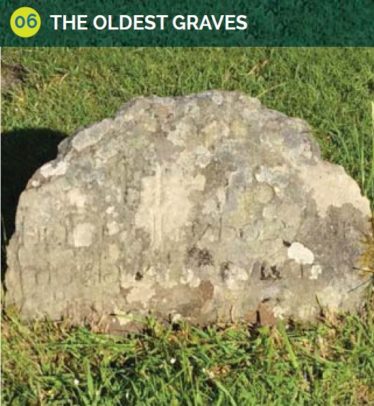 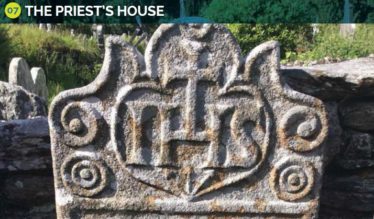 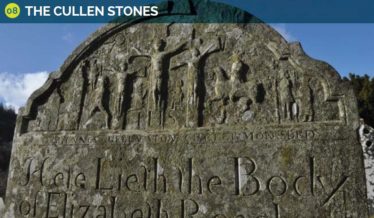 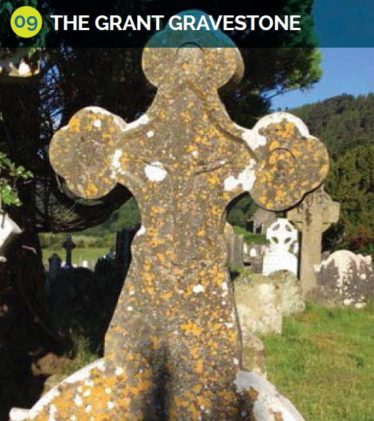 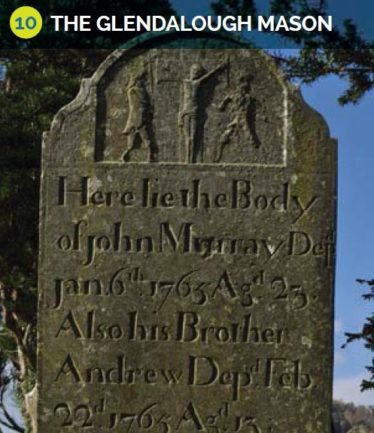 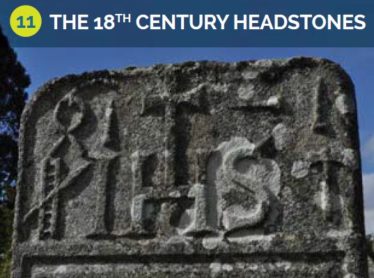 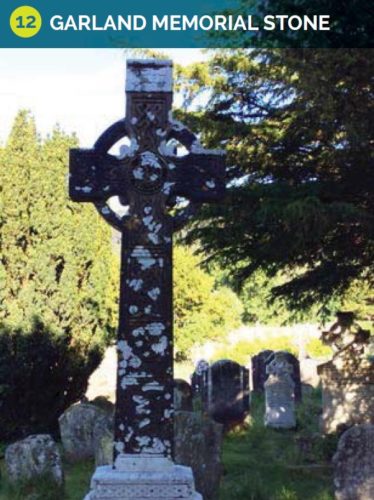 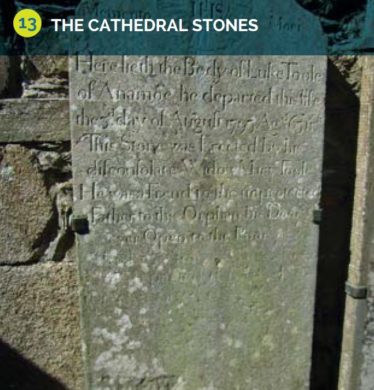 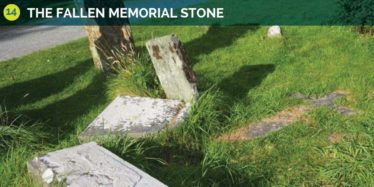 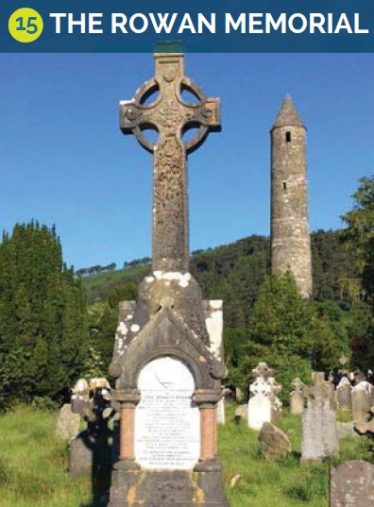 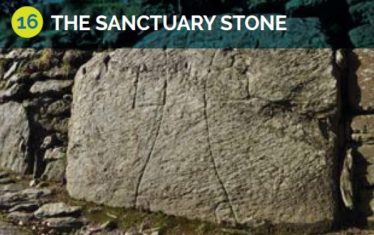 Introduction to the seven churches

The graveyard in Glendalough is one of the most important in Ireland. Its origin goes back to the early days of Irish Christian monasticism in the seventh century when the monastery of Glendalough was founded by St. Kevin.

The medieval lives of St Kevin tells the story that he brought back soil from Rome and sprinkled it in the church and cemeteries of Glendalough. This reportedly made Glendalough one of the four chief places of pilgrimage in Ireland with seven pilgrimages to Glendalough being considered to be of equal value to one pilgrimage to Rome.

As in other early Irish monastic settlements, the graveyard was placed at the very heart of the monastic enclosure. That area can be easily identified today where St. Kevin’s Cross, the
Termon Cross and The Priest’s House still stand.

After the Reformation the churches of Glendalough were abandoned and became derelict. The whole site then became a burial ground inside and outside the ruined buildings. There are many unique and beautifully crafted stones from the eighteenth and nineteenth centuries in the oldest part of the graveyard behind St. Kevin’s Cross south of the Cathedral.

To begin the graveyard trail, stand at the entrance to the monastic settlement which flourished here for more than a thousand years. The ruins of the settlement are now surrounded by more than two thousand gravestones. The double archway stands over an open passageway which allows everyone to enter this special place of memory and story.

This is the work of Imogen Stuart who is a well-known sculptor. Her mother-in-law Iseult Stuart is buried here with her son Ian and her granddaughter Siobhan. Iseult was a daughter of Maud Gonne, an English woman famed for her beauty and her work as an Irish revolutionary and feminist. The poet W.B. Yeats fell in love with Maud Gonne and her daughter Iseult. He wrote about both women in his poems. Iseult married Francis Stuart,
Irish-Australian writer who spent the war years in Germany. Iseult and Ian lived in Laragh Castle.

Under the Round Tower there is a large Celtic cross in a new form. It dates from the end of the 19th century when a Celtic revival was taking place. This was a cultural restoration where seeds of the 1916 Rising and Irish Independence were sown. A member of the Cowley family emigrated to America and named a town in Idaho Rathdrum after his home village in Wicklow. A grand daughter was betrothed at this headstone in 1925.

4. The Keane, Kean and Kane Gravestones

Six headstones standing in a row appear to be in memory of the same family, with variations in the spelling of the surname. The large Celtic cross stands out. There are ivy leaves entwined in the cross which indicates that this family were supporters of Charles S. Parnell, the great Irish nationalist and Land League reformer who lived in the second half of the 19th century in Avondale House, Rathdrum, Co. Wicklow. The ivy leaf was his symbol.

The area around the Priest’s House and Cathedral was probably a cemetery from at least the 11th century. The boundaries were marked by the Termon (‘sanctuary boundary’) cross which still stands outside the western wall and St. Kevin’s Cross on the east side. There is an old custom that people make a wish around St. Kevin’s Cross.

The oldest graves in Glendalough are near the east gable of the Priests’ House. Grave slabs with no name or date of birth cover those graves. They probably date from as early as the 11th century. The oldest standing named stone is also here. It is dated 1697 and the name inscribed on it is Murlaugh Doyle.

The Priest’s House was probably built as a mortuary chapel in the 12th century. Inside the little chapel are four gravestones attached to the north wall. These mark priests’ graves from the 18th century. People took clay from the priests’ graves here because it was believed that it had curative powers for eye ailments.

Many gravestones, the work of the famous stone cutter Denis Cullen can be seen in the
Glendalough cemetery. His work is remarkable for crucifxion scenes with 18th century images
and beautiful hand carved script. An exceptional example of his work is located on a small
green patch to the left of St. Kevin’s Cross. It is a gravestone to the memory of Elizabeth Roach.

The people buried in this grave still have connections in the local community. The gravestone is very unusual in that it has writing on both sides with the reverse side
upside down. There were two Grant families buried here who were first cousins. Their relationship in life continues in the grave.

The name of this mason is unknown because his work is unsigned.He probably received his
training with Denis Cullen. The Glendalough Mason’s distinguishing feature is his script which is bold and deeply incised but lacking the decorative detail of Denis Cullen.

When people began to bury the dead in the ruined monastic settlement, they chose the area
south of the Cathedral behind St. Kevin’s Cross. There are many fine examples of Aughrim granite gravestones here which date from the late 18th century. Among them is one inscribed in Latin in memory of Revd. Thomas Chalmonly who died in 1759.

Monuments east and south of the cathedral walls were erected by the people in recognition of the service of two doctors, Waldron and Garland “in the cause of suffering humanity”. Dr Garland died while visiting a sick patient. A report in The Wicklow People of February 1901 described his very large funeral procession led by 80 women and 100 men as pall bearers dressed in the black crepe of mourning.

Inside the Cathedral there are many gravestones. Some of them are now lying flat on the floor while others are attached to the walls, some of them medieval. Among them are important examples of granite and blue slate stones from the 18th century. One of these stones has an epitaph written half in Latin and half in English, another is remembering Walter Byrne who died in 1750 at the age of 106.

This was erected in memory of James Mernagh from Rathdrum. “He was a sterling nationalist and an Irishman worthy of his country”. The monument now lies on the ground in three parts.

The Rowan memorial stone is dedicated to Rev. Edward Rowan. He ministered among the people of Glendalough and Roundwood for eleven years, beginning in 1862. He built the
first national school in Glendalough and the priest’s house in Laragh. He was one of the priests buried in the Priest’s House in this graveyard.

Inside the second arch on the right, a cross carved on a great slab of mica schist is clearly seen. In earlier times those seeking protection were assured of sanctuary within the inner enclosure of the monastery. They had entered a restricted sacred space where refuge, spirituality and tranquillity were on offer.

The trail ends back where it started. In the end we go back to where we came from. There is always something urging us on to new experiences following in the footsteps of great people who have gone before us.

The Glendalough Heritage Forum (GHF) is a non-statutory partnership that seeks to increase understanding and appreciation of the rich cultural heritage of the Glendalough Valley and to stimulate wider community engagement with this heritage through collaborative initiatives. The GHF aims to increase communication, collaboration and understanding between those
with an interest in the cultural heritage of the famous valley of Glendalough and surrounding settlements. The Forum consists of a wide range of stakeholders including; local residents, land owners, state agencies, County Council representatives and researchers from a variety of institutions.