You are here: HomenextPlacesnextWas Glendalough a Lughnasa site?

Was Glendalough a Lughnasa site?

Glendalough, in the heart of the Wicklow Mountains, translates from Irish as ‘the glen of the two lakes’. These are known today as the Upper Lake and the Lower Lake.

Some readers may be familiar with the stories of a monster at Glendalough. The earliest account we have of this monster story comes from one of the Irish Lives of St Kevin, who founded the famous monastery there. According to this story none other than Fionn MacCuamhaill prophesised that Coemgen (i.e. Kevin) would overcome a monster in the lower lake of Glendalough;
“There was a horrible and strange monster in the lake, which wrought frequent destruction of dogs and men among the fiana of Erin. Coemgen recited his palms, and entreated the Lord, and He drove the monster from him into the other lake. That is to say, the lesser lake, in which the monster (originally) was, is the place where now help of every trouble is wrought both for men and cattle; and they all leave their sickness there, and the sicknesses and diseases go into the other lake to the monster”. 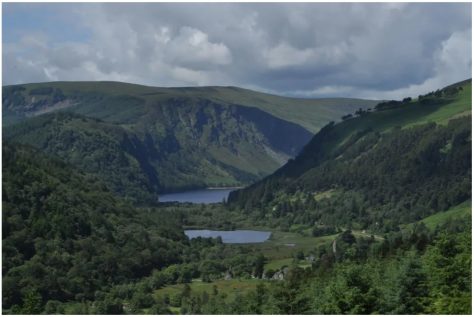 There are a number of key elements to this story. Firstly, St Kevin, with the help of God, drives an evil monster from the lower lake to the upper lake. Secondly, it is clear that the lower lake was associated with cures, not just for human ailments, but for cattle also. Finally, the implication of this is that the lake had curative properties in pre-Christian times, before Kevin banishes the monster.

When first reading this passage closely, I was immediately struck by how similar some of these elements are to a number of known to have been Lughnasa sites. For example, writing a description of Westmeath in 1682 Sir Henry Piers commented that it was traditional on the first Sunday in August (i.e. Lughnasa) to ‘drive their cattle into some pool or river, and therin swim them’. In 1808 these traditions were still strong in Westmeath, and it was recorded that the locals were still swimming their horses on ‘Garlick Sunday’. At Lough Owel, also in Westmeath, the Lughnasa traditions consisted of a horse race in the lake, and a report of one of these in 1818 tells how a young man was pulled off his horse and killed by a monster.

In 1838 Thomas O’Conor of the Ordnance Survey recorded the traditions associated with Loughkeeran near Bohola, Co. Mayo, on the last Sunday of July;
“The people, it is said, swim their horses in the lake on that day, to defend them against incidental evils during the year, and throw spancels and halters into it, which they leave there on the occasion. They are also accustomed to throw butter into it, with the intention that their cows may be sufficiently productive of milk and butter during the year”.
Similar stories have been documented concerning St Marcan’s Lough in Clew Bay, also in Mayo. Clearly, the association of swimming horses and cattle at Lughnasa was a very ancient tradition that was originally seen as having preventative powers rather than simply curative ones.

In 1904 Lord Walter Fitzgerald documented the local placenames in Glendalough, and recorded that the lower lake was then known as ‘Lough-na-Peestha, .i.e. the lake of the serpent. Even as recently as a hundred years ago the story of St Kevin overcoming a monster or serpent in the lower lake was still strong. Interestingly, there is also the added dimension in these more recent traditions that St Kevin overcame the monster with the help of his wolfhound ‘Loopah’.

And what of St Kevin himself? While it is easy to read too much into the story that his greatness was supposed to have been prophesised by Fionn MacCuamhaill, it may be much more significant that all sources agree that Kevin’s father was Caomhlugh, caomh meaning ‘fair’, and Lugh almost certainly derived from the name of the ancient Irish god of Lughnasa.

While there is disagreement about the dating of the various Lives of St Kevin, all agree that they were written several hundred years after his death. It is therefore dangerous to transfer too much from these Lives back to the time of St Kevin, let alone before his time. And while the evidence for a Lughnasa connection with Glendalough is tenuous, it is also very tempting and finds significant parallels with known Lughnasa sites elsewhere in the country. Firstly, there is the story of St Kevin overcoming a wild monster in the lake, which finds parallels with other sites, such as St Patrick at Croagh Patrick, but also at Lough Owel, Co. Westmeath, where part of the Lughnasa tradition of racing horses in the lake may have been all the more exciting because of the presence of a monster in the lake. Indeed, such traditions of lake monsters may ultimately be a corruption of an anti-Lugh deity in pre-Christian times. There is also the tradition of men and cattle coming to the lake at Glendalough for cures, which is typically associated with Lughnasa sites elsewhere in the country. Finally, there are the possible connections between St Kevin himself (i.e. through his father) and the ancient Irish god Lugh. 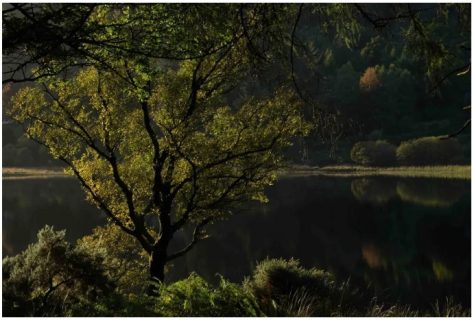 If this is the case, then it raises a number of interesting issues. Firstly, it clearly indicates that Glendalough was not an isolated part of the Wicklow Mountains and the desirable location of a hermit (i.e. St Kevin) seeking isolation from the world. Instead, it tells us that the later importance of Glendalough, the ‘city of God’, owes its origins to a pre-Christian deity. It may also take us a step further, and force us to raise the question, was St Kevin himself a real person, or could he be a Christian personification of Lugh himself?

By way of a postscript, and if only to thicken the plot – it might be worth noting that according to some sources, one of St Kevin’s successors was none other than St Moling. Máire MacNeill, in her book The Festival of Lughnasa, notes that the Fair of St Mullins in Carlow, rather than being associated with St Moling’s feast day on June 17th, was instead was associated with the feast of St James, i.e. 25th July (curiously, the infamous Fair of Glendalough was traditionally held on the last Sunday before St Kevin’s feast day, i.e. June 3rd, and was suppressed in the late 19th century). MacNeill provides a compelling argument that St Mullin’s was originally a Lughnasa site. Given the attempts in the Latin Life of St Moling to link the saint with St Kevin and Glendalough, it may be no coincidence that Fionn MacCuamhaill also prophesises the greatness of Moling. While this may not be significant in itself, what may be much more significant is Pádraig Ó Riain’s suggestion (in his book A Dictionary of Irish Saints) that “the saint’s name may ultimately derive (through lu-n-g-/li-n-g-) from the divinity name Lugh”.

This article appears with the kind permission of Christiaan Corlett. It is taken from his blog and the original entry, dated September 2019, is available here.

All text and image copyright of Christiaan Corlett.