You are here: HomenextTopicsnextArchaeologynextNote on an Inscription at Glendalough (published in 1912)

Note on an Inscription at Glendalough (published in 1912)

It is also stated that Dr. Petrie had failed to decipher the letters which follow the names; and I am not aware that any inquirer has since done so.

Dr. Petrie, however, had the rare gift of being able to copy markings accurately without the assistance of their meanings; and on comparing his sketch with the slab of Bresal, now preserved in St. Kevin’s Oratory, it becomes evident that the letters after the names are the same.

The Rev. James Graves read those on the latter stone as the Greek letters

though some of the forms are unusual, and several are Irish rather than Greek.

Mr. P. J. Lynch has drawn attention to the occurrence of the same letters on a stone at Church Island in Lough Currane; and the last three may still be read on the slab of St. Berechert at Tullylease.

These letters have, therefore, been found in Ireland on four stones of early date ; it is of interest to identify them not only on account of their rarity, but also because in this case the presence of the patronymic enables the stone to be dated with reasonable certainty. As mentioned in Christian Inscriptions, the Annals of the Four Masters record, under the year 1013, the death of Cairbre, son of Cathal, anchorite of Glendalough. 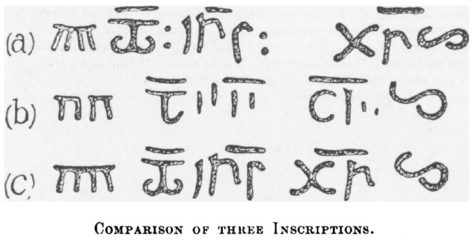 In the cut, (a) shows the letters on the bresal slab, (b) those on the Corpre stone as drawn by Petrie, and (c) their proposed restoration. The first markings in (b) resemble the letter n repeated, but it is only necessary to join their tops to get the curious form of Alpha seen on the bresal stone.

The next character only requires the addition of a second curve at the bottom to give the combination of & and Omega used on the same stone ; and similarly with the rest. If any additional proof is wanted, it is given by the identity of the last character in each case – an S placed horizontally.

The fact that the bresal stone, unknown in Dr. Petrie’s day, has supplied the key to these markings tests very severely the accuracy of his drawing, and it is pleasant to find it completely vindicated. – Henry S. Crawford.

Henry S. Crawford (published by the Royal Society of Antiquaries of Ireland in 1912)