You are here: HomenextPeoplenextThe Bridges of Glendalough

The Bridges of Glendalough

The Glendalough Valley is served well by four unique bridges that safely ferry locals and visitors over the complex river and stream network regularly charged by runoff from the surrounding mountains. Each of these bridges has it’s own story to tell.

Located to the west of the Royal Hotel and providing access to Glendalough’s famous Gateway, the Glendasan Bridge was built in the 1870’s to provide access to the spectacular monastic remains. There is annalistic evidence of an earlier bridge having been destroyed by a great flood in 1177. 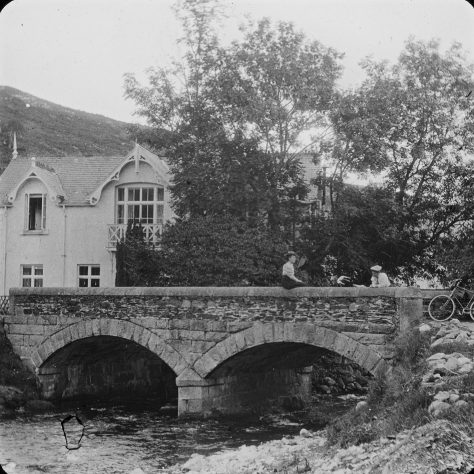 Glendasan Bridge. Courtesy of the National Library of Ireland

There is no further account of a bridge until the 1870’s, though it is possible a bridge may have served the complex until it fell into a state of abandonment following its burning by the English in the closing years of the fourteenth century.

The beautiful bridge standing today was built to facilitate the preservation of the medieval standing stones that provided access to the religious site for centuries. 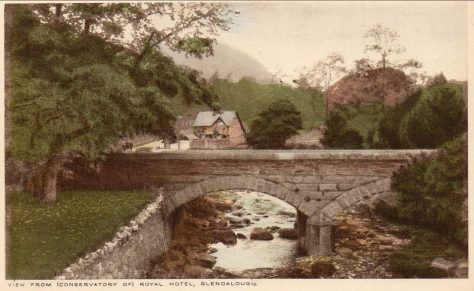 In low water, five of these large standing stones are visible beneath the bridge and can be viewed by standing upstream on the southern bank.

The bridge was built over the standing stones with the central pier and cutwater carefully positioned between two of the stones.

These standing stones are well recorded in numerous drawings and paintings and it is remarkable that they have survived in situ to this day. 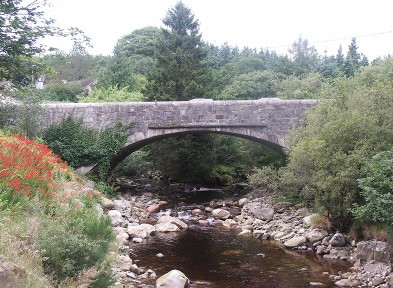 Laragh Bridge. Courtesy of the National Inventory of Architectural Heritage.

The current bridge in Laragh village crosses the Glenmacnass River and was built in 1955-56 by the engineers J.T. O’Byrne and J.J. Rowan. 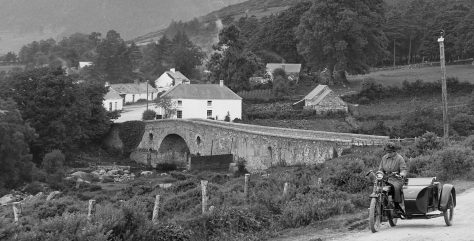 Old bridge into Laragh Village. Courtesy of the National Library of Ireland.

The impressive single span, concrete arch was built as the older bridge had fallen into disrepair and had to be replaced.

There is speculation as to whether the old Laragh bridge was the original bridge, built as part of the Military Road by Major Taylor (O’Keeffe, Simington & Goodbody, 2016). 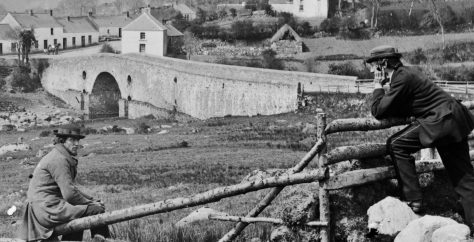 The Old Laragh Bridge. Courtesy of the National Library of Ireland.

The impressive granite coping stones from the original bridge were re-used and still look wonderful atop the bridge today.

The Derrybawn Bridge lies further south and was built c. 1805. Crossing the Glendasan River, it now acts as part of the private driveway to Derrybawn House. It was most likely built by Major Taylor as part of the Military Road. 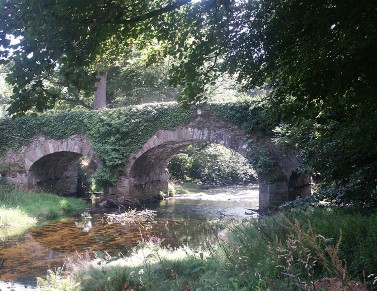 Derrybawn Bridge. Courtesy of the National Inventory of Architectural Heritage.

It consists of three spans, the central of which is much wider than the flanking arches. It appears that much of the larger stones used in the bridge construction may have come from ecclesiastical ruins along the Green Road towards Glendalough and indeed cut stone remnants can be found in places beneath the rough coping. This lends a particular importance to the heritage value of this bridge.

Named after William Bookey – purported to be the Bookey referred to in the famous 1798 ballad ‘Boolavogue’ – this 12 metre single-span bridge was built in 1838.

Bookey’s Bridge. Courtesy of the author.

The aforementioned Derrybawn Bridge brought the Military Road over the Glendasan and in front of the lawn of Derrybawn House, as visible on the OSi first edition map.

However, Bookey was building his new bridge and re-aligning the road at the time of the survey and they are also visible, lightly drawn on the map. 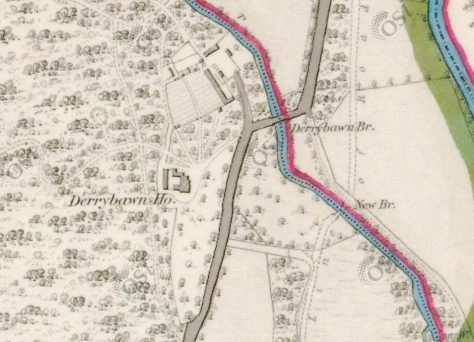 This very fine, ashlar granite bridge was built, along with almost 800m of roadway, at Bookey’s expense. The road was built on the opposite bank of the Glendasan, giving Derrybawn House a sweeping lawn down to the river.

Worth noting on Bookey’s Bridge, are the 5cm holes drilled into the sides of the bridge. These were added during WWII so the Irish Army could blow the bridge in the event of a German invasion.

The bridges in the valley span more than the mountain rivers they carry us over – they span many centuries and much history – marking and protecting ancient crossings, carrying pilgrims, rebels and royalty, built to carry armies then drilled to halt invaders. The next time you cross one of these remarkable bridges, stop and look a little closer.

Location
The Bridges of the Glendalough Valley