You are here: HomenextPlacesnextSt. Kevin's Church, Glendalough - The Foundation: Extractions made by Father Sean O'Toole (published in 1999) 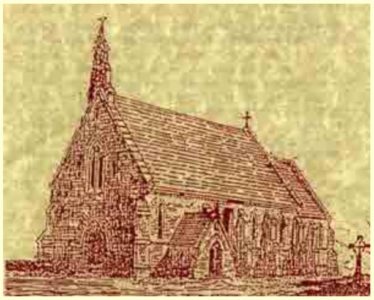 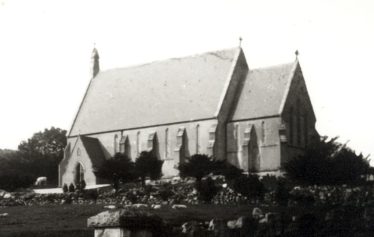 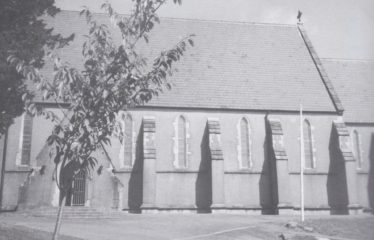 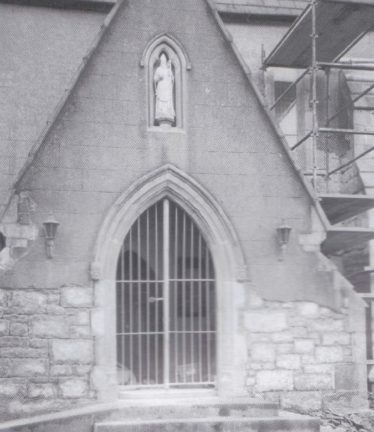 The parishioners of St. Kevin’s Glendalough have several unique reasons to be especially proud of their Church. The history of the building of the parish church shows that:

1. St. Kevin’s is a unique Church within the diocese, if not in all Ireland.
2. St Kevin’s was built in a time of great need among the people.
3. The parish church is “Old Irish” in style.

The following are extracts from the Catholic Registry that Father Sean O’Toole, who is currently Parish Priest for Glendalough, has provided, as they are of extreme interest.

For three centuries the Vale of Glendalough, where once flourished the famous school which has been justly designated the ‘luminary of the western world”, and where the patriotic St. Laurance O’Toole received his early trainings, has been silent and desolate. Ages of anarchy produced their ever-natural consequence, and the festival of the great saint whose memory is inseparably connected with that locality, was, instead of what it had been in “the ages of Faith”, a scene of innocent joyfulness and Christian comfort, the haunt of wild revelry and gross dissipation.

Some few years since the Catholic pastor wished, as far as was in his power, to rescue the holy vale from such abominable desecration; and as a step towards the accomplishment of so desirable an object, restored the ancient church, commonly called the St. Kevin’s Kitchen, to it’s original use, and there celebrated the Holy Sacrifice on all Sundays and festivals, till the authorities of the Protestant church, to whom the ground and buildings Legally belong, prohibited the occupation of the church for such purpose. Since then it has been lying open, and is desecrated in various ways, while the numerous Catholic population of the district have to travel some miles to receive the consolation of religion.

This unfortunate state of affairs is about being remedied in the most gratifying manner. Through the liberality of a Protestant gentleman of the district Captain Hugo, a site for a new church has been obtained, and by the munificence of Andrew Byrne of Croneybyrne, Esq, and of Peter Kelly, Esq, of Little Britain Street, Dublin, the singular minded and zealous pastor Rev. Eugene Clarke, has been enabled to commence a church in every respect worthy it’s purpose and it’s locality.

On the 3rd June last, the Festival of St. Kevin, the Patron of the Diocese of Glendalough and of the parish, the first stone was laid with due ceremony. A wooden cross (which still remains to mark the site) had been erected the previous day, according to the rubric of the Roman Ritual, and of the arrival of the very Rev.Theobald Matthew, a procession of a numerous train of priests and gentlemen from the surrounding districts were formed, and the first stone having been blessed by the Apostle of Temperance, who had been duly authorised for that purpose, was laid by Peter Kelly, Esq. assisted by the architect. The sacred edifice of which we give two illustrations, will be

” A pile of simplest masonry,
With narrow windows and vast buttresses.”

It will consist of the two-essential parts of a true Catholic Church, a well-proportioned chancel for the celebration of the sacred mysteries, and an ample nave for the reception of the worshippers. The latter will be separated from the former by a chancel screen supporting a rood. At the western end of the south side, there will be a porch with stoups for holy water, hollowed out of the sidewalls. In the nave, immediately within the entrance from the south porch, will stand a baptismal font of cut stone, and of antique design and proportions. The chancel will be furnished with a stone altar, a piscine, ambry, sedilia and sepulchre. There is to be an appropriate Sacristy on the north side of the chancel. The style of architecture will be the simplest and the severest, “first – pointed”. The roof will be high in pitch, open and real. Its timbers will be exposed, planed and simply chamfered on the angles; thus decorating the essential construction, and not concealing it by a plastered ceiling. The sidewalls will be pierced by long, narrow lancet windows, and flanked by buttresses of bold projection; the structural value of which is to counteract the pressure of the roof, while they decorate the building by relieving the flat surface of the walls.

The West Front contains a large door with jamb shafts and characteristic archvault mouldings. Over it will be a handsome window composed of two lancet lights comprised within a label or drip-stone, the intervening spandrel being pierced with a quatrefoil opening, the cusps of which will terminate with Shamrocks. A belfry of simple design, surmounted by an antique Irish cross, will crown the western gable. All the other gables will be likewise terminated with floriated crosses.

The East End will consist of a triplet window, with a hood moulding passing over it, and a roll and fillet-string course underneath. Over the triplet window there will be another window in the form of the ‘vesica-pescis’. If the funds permit the floor will be covered with encaustic tiles, the windows filled with stained glass, and the walls decorated with polychromatic colouring, in the style of the Middle Ages. In fact, it is the intention of the zealous Parish Priest and of those engaged in the holy undertaking, to make this structure a complete revival of the church of the “ages of faith”, as many of which are scattered over the face of our country,

“From high Benhaider’s summit soar
To Ara in the lonely west.”

And which even in their present ruined and desecrated condition attest the piety, taste and skill of our catholic ancestors.

The architect is to be Mr James J. McCarthy.

The foundation stone was laid on 3rd June 1846, the feast of St. Kevin, by Mr Peter Kelly of Dublin, assisted by the architect. The site was obtained ‘through the liberality of a protestant gentleman of the district, Captain Hugo’,, and generous donations of money were made by Andrew Byrne, of Croneybyrne, Esq, and Peter Kelly, Esq, of little Britain-Street, Dublin

Since the ceremony of the laying of the first stone, the works have progressed slowly, but well and steadily. The foundations are already built, ‘broad and deep’, as if to show, in the words of the Catholic minded poet, that those who “thus could build dreamed not of a perishable home”, and a vast quantity of materials has been collected; yet much in the way of co-operation and assistance in pecuniary matters has to be done. The funds already in hands, together with what has been expended, are the results of the private munificence of the gentlemen whose names we have already given, and whose kindness will long be remembered by the humble Christians of Glendalough, are inadequate to the undertaking. It is therefore hoped that those to whom this romantic valley brings feelings of the holiest and tenderist nature, will not be remiss in contributing, as far as their means permit, to the completion of the good work.

This church (a full description and illustration of the design of which were given in our last registry,) has been steadily progressing during the last year, not withstanding the unfavourable circumstances of the times. The walls of the nave and Chancel are raised to the height of the windowsills; those of the sacristy are nearly completed. A considerable quantity of hewn stone and other material is now collected in the churchyard, and more is in active preparation; so that, it is hoped, the entire building will be greatly advanced before the next feast of the Patron Saint.

In the directory for 1846, we presented our readers with illustrations and a general description of this church interesting alike from its locality and from the circumstances of its erection. It is the first Catholic Church designed by Mr McArthy, and may fairly be considered the beginning of the revival of the ecclesiastical architecture in Ireland. It was commenced too, in a year of famine; and too much honour can be given to the courageous priest (Rev. P. Clarke), who took heart to build St. Kevin’s in those dark and terrible hours. From his own resources, and those of his private friends, this excellent clergyman has erected the walls of a temple worthy the honour of the Living God. The roof is all that is now required to render the church complete and fit for the celebration of the Divine Mysteries. As so much has been done by private munificence, we hope that that portion of the public who care for the interests of religion and of Christian art, will contribute towards the finishing of this church, and that the ensuing year will witness its solemn dedication.

This church is on the eve of being so far completed as to render it for divine worship. During the past year, by the unwearying and unostentatious exertions of the parish priest and a few of his friends, means have been obtained for erecting open timber roofs of solid construction and lofty pitch on the Chancel, nave, sacristy, and south porch. The windows are now being glazed. Arrangements have been made that the solemn dedication will take place on the approaching festival of the Patron Saint, the 3rd of June.

We are requested by the parish priest to return his thanks, and those of his poor flock, to the kind benefactors who have aided them in raising this much-needed church in a locality once sacred to piety and learning. For a particular account of this building, Taken from the designs of Mr McArthy, Architect, which in it’s management and minutest details, is a strict revival of the simple parish church of the middle ages, we refer to the volume of our registry for 1847.

Extracts from: J.J. McCarthy and the Gothic Revival in Ireland, Sheehy, J., Published by the Ulster Architectural Heritage Society, 1977.

Some images reproduced here did not appear with original article.