You are here: HomenextTopicsnextArchaeologynextHut Platforms at Glendalough (published in 1938)

Hut Platforms at Glendalough (published in 1938)

The area explored on October 10th, 1938, extended for about 1 and a half miles on the north side of the upper lake and 1 mile on the south side, from the lead works eastwards, and to a distance of some 200 yards linear from the lake edge.

About 70-80 sites were noted, 34 on the north and 37 on the south side of the lake. There are probably many more than these, as the examination was not exhaustive and parts of the area were obscured by bracken and plantations.

The sites were more or less evenly spaced over the steeply sloping mountain sides on each side of the lake, being perhaps slightly closer together near the water. They occur roughly between 440 ft. (water level) and 800 ft. There is a concentration near the upper end of the valley on the north side. Some of the platforms are immediately above water level.

The sites, which now appear as oval terraces, were formed by excavating a semicircular recess in the steep mountain slope, sometimes to a depth of 8 feet, and building out a terrace below this, with the excavated material, to a height, in some cases, of 10 feet. The normal terrace so produced varies in dimensions from 15 to 21 feet depth and from 21 to 30 feet width, though a few larger ones near the lake are as much as 30 x 36 feet.

Smaller platforms are associated with a few of the sites, and placed a few feet away from them. Other small platforms are isolated. They average about 8 to 10 feet in diameter and are generally circular. In two cases there are remains of stone rings on them.

The better preserved examples of the normal size have low wing banks, constructed of earth, or earth and stones, flanking the platform on each side. These reduce the level area to a circle, and were probably a constant feature, accounting for the extra 6 feet of width over depth of most of the sites. 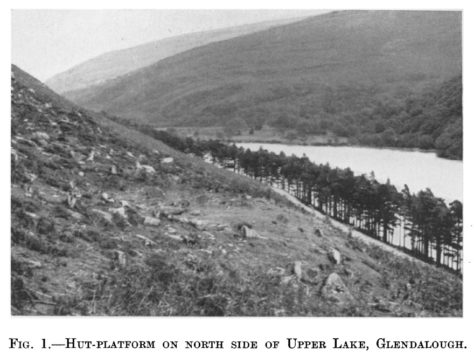 The platforms are level and usually clear, but some bear stones arranged in a circle, others have mere heaps. Some of the platforms are visibly revetted with stones. In many cases, and wherever observation was possible (in rabbit burrows, etc.), large quantities of charcoal were found in the built up material of the terraces, and once at the foot of the excavated upper slope.

In our opinion the evidence points to a construction of circular wooden huts on the platform, although abundant stone was immediately available. These huts would have been from 12 to 20 feet in diameter. There is no trace of any cultivation or enclosures connected with the huts. It is possible that the huts may have been either cells of the monks, or relate to an earlier occupation of the valley. Excavation should settle this question.

Mr. C. A. Ralegh Radford, Director of the British School at Rome, writes: ” I am very interested in your note about Glendalough. I agree that the huts are probably monastic.

(1) Huts of wattle and turf or other simple construction are suggested by the term tugurium or tuguriolum often used in the texts to describe monastic cells (e.g., Adamnan, Vita Columbae, Ed. Reeves, pp. 58, 216, etc.).

(2) Such a hut at Iona is described by Crawford in “Antiquity,” VII, 461, though the ground did not make terracing necessary there.

(3) The process described at Glendalough, cutting into the hill side and throwing the material out to form a terrace roughly revetted, is that discovered in my recent excavations of the cliff terraces at Tintagel.

(4) We know from the testimony of Bede iii, 4, that stone buildings were unusual among the Britons, and, we may presume, also among the Irish. Most of the known ones are far later. These reasons suggest that wooden or turf huts might be expected. As to the extent:-

(5) The extreme area covered seems about 1 and a half miles by 1 mile. Compare Iona, where the Vallum Monasterii enclosed 350 yards by 300 yards, (a) This is much earlier than the final state of Glendalough. (b) The area is much more adapted for thick settlement. Compare also Bangor-on-Dee, where the two reputed gates are about 20 miles apart, though here much of the intervening area was swampy flood plain.

(6) My recollection of Glendalough is a narrow valley. The vallum monasterii need only run across this, not round the whole settlement. It was in no sense defensive. A search should reveal this. We may therefore say that the positive evidence points towards the monastic explanation of your site. On the negative side:-

(7) Your description does not read like that of any Celtic village that I know. Big agglomerations like Maiden Castle are more closely packed.

(8) Big agglomerations first appear in Celtic Britain with Hawkes’ Iron Age A (e.g., the first E.I.A. fortress in Maiden Castle). In Devon and Cornwall they are late (1st century). In Wales they only just precede the Roman Conquest. In Brittany they are exceptional and late. In Ireland such a city is unlikely to be earlier than in the neighbouring Celtic lands. It is unlikely to be of the Roman period, as the great cities then were the palace fortresses, the type of which we know from Tara and Uisneach, both occupied from 1st to 5th centuries.

We are therefore driven to a Christian date by this line of argument, and until excavation or history produce other evidence I shall believe your discovery to represent the monastic settlement of the early period, a group of small huts spreading up the slopes as at Tintagel and on the Skellig.”  W.J.H.

W. T. Hemp & C. Gresham (published by the Royal Society of Antiquaries of Ireland in 1938)